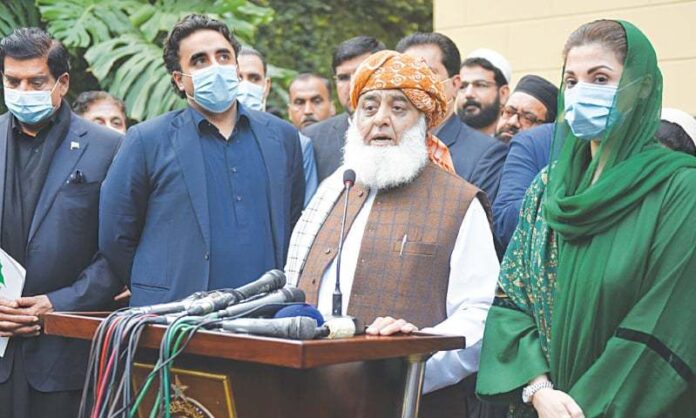 ISLAMABAD, April 05 (Online): PDM has sent show cause notices to PPP and ANP with the approval of its chairman Maulana Fazlur Rehman.

Both the parties have been directed to show cause as to why they sought support of government senators in the election of opposition leader in Senate as this move on their part caused damage to opposition alliance and movement.

The two have been asked to show cause for seeking help from senators of father and violating PDM principles.

Sources said it is mentioned in the context of show cause notice that the PPP and ANP moves have caused damage to opposition alliance and movement. Position should be explained as to why such steps were taken..

Talking to media men in parliament house, Shahid Khaqan Abbasi said show cause notices have been issued to PPP and ANP with the approval of president PDM whereby it has been asked you have acquired opposition leader seat in Senate by obtaining votes from treasury benches. This is against the PDM narrative. In this regard PDM will decide. 7 days have been given to PPP and ANP to file their reply. Whatever reply is received will be presented in the meeting of PDM summit meeting.

He said it was mentioned on the notice PDM will not make this notice public. However both the parties can make it public if they will so.

He pointed out PDM has postponed long march. PPP was given opportunity to ask from CEC and tell us if it will tender resignations or otherwise.

To a question Khaqan said that PDM will not review its decision for not accepting Syed Yousuf Raza Gillani as opposition leader in Senate.

Talking to media men in parliament house, Syed Yousuf Raza Gillani has said we have not give reply to show cause notices issued by PDM. What situation after our reply we will express our opinion over it. We are still part of PDM.
Ends/Online