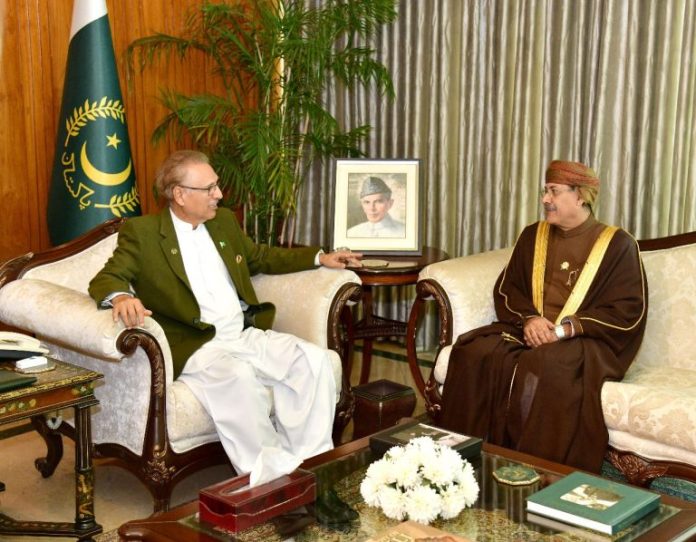 President Dr Arif Alvi on Wednesday said Pakistan and Oman needed to work closely to substantially enhance the volume of bilateral trade by further deepening the business and investment ties.

Talking to the outgoing Ambassador of Oman to Pakistan, Al-Sheikh Dr Mohammed Omar Ahmed Al-Marhoon, here at the Aiwan-e-Sadr, he called for establishing close linkages and enhancing the interactions among the businessmen and investors of the two brotherly countries.

The president said Pakistan and Oman, which enjoyed a brotherly strategic partnership in many areas, were bound together by common history, cultural heritage, values, faith, traditions and proximity of geography.

The volume of mutual trade between the two countries stood at $653 million and should be further enhanced by making collective efforts, he added.

President Alvi said the possibility of starting a ferry service between Pakistan and Oman should be explored. The ferry service, he added, would facilitate the export of Pakistani fresh vegetables, fishery and other edible items to the entire Middle East through Oman, which would also help improve the trade and investment between the two countries.

During the meeting, the president highlighted the increasing trend of persecution of minorities, especially Muslims in India, the increase in violent incidents of Islamophobia, and atrocities committed by the Indian forces against the innocent Kashmiris in the Indian Illegally Occupied Jammu & Kashmir (IIOJK).

Dr Alvi urged the world community to take notice of the persecution of minorities and rising Islamophobia in India and to use its influence for the resolution of the Jammu & Kashmir dispute in accordance with the resolutions of United Nations Security Council and the aspirations of Kashmiri people.

He said Pakistan would appreciate the early ratification of two recently signed memoranda of understanding on Maritime Cooperation and Defence Cooperation in the year 2020.

He stated that the Pakistani diaspora in Oman, approximately 250,000, was serving both the countries in various fields and the resolution of labour issues of Pakistanis living in Oman would further cement relations between the two countries.

The president expressed the hope that the issue of recruitment of Baloch people from Gwadar and Makran, halted since 2015 due to the economic crunch in Oman, would be addressed at the appropriate level.