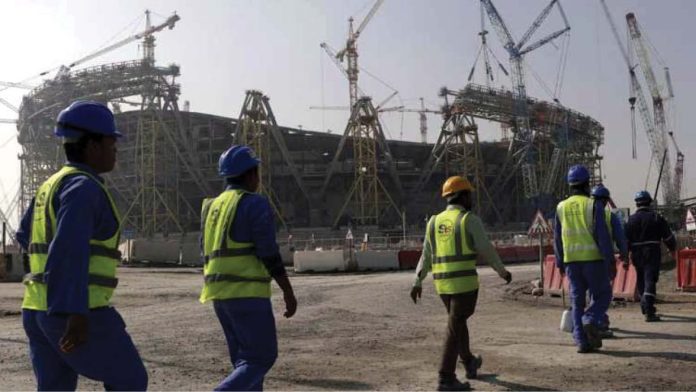 Qatar
The Qatari official responsible for delivery of the 2022 World Cup has said the number of migrant workers who have died on World Cup-related projects is “between 400 and 500”.
Hassan al-Thawadi, the secretary general of the Supreme Committee for delivery and legacy, made the admission in an interview but said a precise figure for the number of fatalities was still “being discussed”.
“The estimate is around 400,” Thawadi told the TV show Piers Morgan Uncensored. “Between 400 and 500. I don’t have the precise number, that is something that is being discussed.
“One death is too many, it’s as simple as that. [But] every year the health and safety standards on the sites are improving, at least on our sites, the World Cup sites, the ones we are responsible for. Most definitely to the extent that you have trade unions [commending] the work that has been done on World Cup sites and the improvement.”
After the interview there was anger at Thawadi’s comments with Nicholas McGeehan of the advocacy group Fair Square saying: “This is just the latest example of Qatar’s inexcusable lack of transparency on the issues of workers’ deaths. We need proper data and thorough investigations, not vague figures announced through media interviews. Fifa and Qatar still have a lot of questions to answer, not least where, when, and how did these men die and did their families receive compensation.”
The Supreme Committee has always maintained there have been only three work-related fatalities and 37 non-work-related deaths among migrant workers at World Cup stadiums since construction for the tournament began in 2014.
In 2021 the Guardian published research that showed that more than 6,500 migrant workers from five countries – India, Pakistan, Nepal, Bangladesh and Sri Lanka – had died in Qatar between the start of 2011, the year after country won the right to host the World Cup, and 2020.
While the Guardian’s figures showed the total number of deaths from all causes and in all locations, activists have always argued that the World Cup caused an increase in the number of migrant workers travelling to the country. At the time McGeehan said: “A very significant proportion of the migrant workers who have died since 2011 were only in the country because Qatar won the right to host the World Cup.”
The Qatari government did not dispute the Guardian’s figures, but said that “the mortality rate among these communities is within the expected range for the size and demographics of the population”.
The official figure of three stadium work-related World Cup deaths was repeated by Fifa and used in a speech by its president, Gianni Infantino, in an address to the European Council earlier this year.