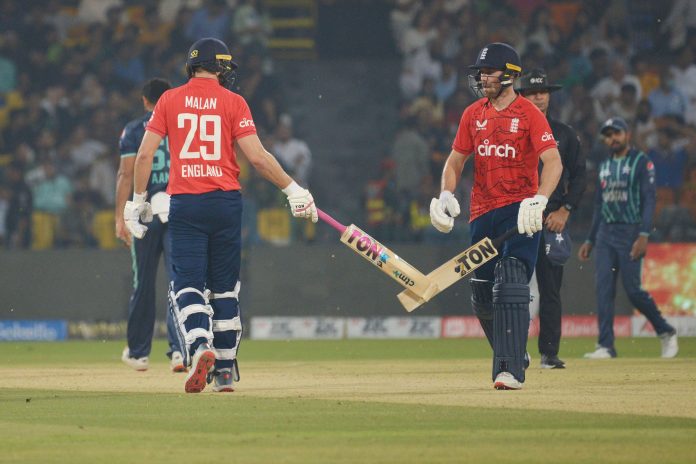 Babar joins Virat Kohli in becoming fastest batter to reach 3,000 T20I runs
LAHORE
Opener Phil Salt scored his career-best half-century as England level the seven-match series 3-3 against Pakistan on Friday.
Salt’s blistering 87-run not out knock of just 41 balls helped the visitors cross the winning line in just 14.3 over with eight wickets in hand.
The right hander struck 13 boundaries and three maximums in his breath-taking innings.
He was well supported by Alex Hales (27) and David Malan (26). Ben Duckett played an unbeaten cameo of 26 runs. The series decider will be played at the same venue on Sunday
Earlier, Babar Azam equalled India star Virat Kohli’s record of the fastest man to 3,000 runs in cricket’s shortest format as Pakistan scored 169-6 in the sixth Twenty20 international against England.
The Pakistan skipper, who hit an unbeaten 59-ball 87 for his 27th half century, reached 3,000 T20I runs in 81 innings as he anchored the home team’s total after they were sent in to bat.
Azam hit Richard Gleeson for a six to join Indian duo of Rohit Sharma (3,694 runs in 140 matches) and Kohli (3,663 in 108), New Zealand’s Martin Guptill (3,497 in 112) and Ireland’s Paul Stirling (3,011 in 114) in the milestone.
Azam hit three sixes and seven boundaries and added 48 for the fourth wicket with Iftikhar Ahmed (31) and 47 for the third with Haider Ali (18).
Sam Curran (2-26) and David Willey (2-32) were the successful England bowlers. Pakistan, who lead the seven-match series 3-2, handed a T20I debut to 21-year-old wicketkeeper/batsman Mohammad Haris as they rested Mohammad Rizwan.
Fast bowler Haris Rauf was also rested, making way for Shahnawaz Dahani. England rested the pace duo of Mark Wood and Chris Woakes to bring in Reece Topley and Gleeson.
Azam joins an elite list of T20I batters in the 3000-run club. India duo of Rohit Sharma and Virat Kohli head the run tally in men’s T20Is with more than 3000 runs. Martin Guptill and Paul Stirling are the others in the club.
However, Azam recorded 3000 runs in 81 innings, equalling Virat Kohli’s record in the format. Kohli and Azam are the only two batters to reach the milestone in less than 100 innings
In women’s T20Is, Suzie Bates, Meg Lanning, and Stafanie Taylor have over 3000 runs. Overall, Babar is the eighth player to the landmark in T20Is.
The next Pakistan batter in the list is Mohammad Hafeez with 2514 runs followed by Bismah Maroof with 2388 runs. Shoaib Malik and Rizwan are the only others outside these three from Pakistan with more than 2000 T20I runs.