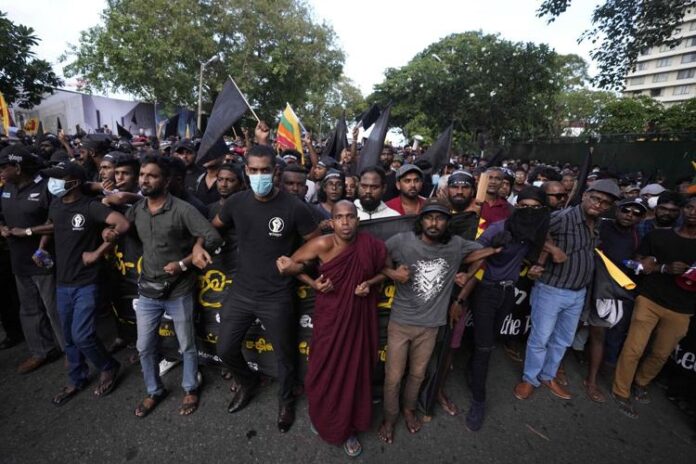 ‘The youth are calling for a change in the existing system… Therefore, I propose to appoint four youth representatives to each of these 15 committees’
COLOMBO
Sri Lanka’s prime minister said Sunday that protesting youth groups will be invited to be part of governance under political reforms he is proposing to solve the country’s political crisis triggered by an economic collapse.
Prime Minister Ranil Wickremesinghe said that under proposed constitutional reforms, powers of the president will be clipped and those of Parliament strengthened. In a televised statement to the nation, he said that governance will be broad-based through parliamentary committees where lawmakers, youth and experts will work together.
“The youth are calling for a change in the existing system. They also want to know the current issues. Therefore, I propose to appoint four youth representatives to each of these 15 committees,” Wickremesinghe said.
Protesters consisting of mainly young people have camped out outside the president’s office for more than 50 days. They’re demanding the resignation of President Gotabaya Rajapaksa, holding him and his family responsible for the country’s worst economic crisis. They also want an overhaul of a system of governance, saying successive administrations since independence from Britain in 1948 have misruled the country leading to economic and social crises.
Students have led nearly daily protests in capital Colombo and elsewhere as Sri Lanka tethers on the brink of bankruptcy. It has already defaulted on its foreign loans, and is battling acute shortages of essential goods like cooking gas, fuel and medicines. People have been forced to wait for hours in long lines to try to buy goods and many still go empty handed.
The country’s foreign currency reserves have dwindled to just enough to purchase two weeks of needed imports.
Authorities announced last month that they were suspending repayment of nearly $7 billion foreign debt due this year. Sri Lanka has to pay up $25 billion through 2026. Total foreign debt of the Indian Ocean island nation is $51 billion.
According to Wickremesinghe’s proposal, one of the youth representatives will be appointed by the so-called “youth parliament” and the other three will come from protesting groups and other activist organizations. “The methodology used to chose these individuals can be decided by the youth organizations themselves,” he said.
There has been no immediate comment from youth groups to his proposal. Setting up new broad-based parliamentary committees apparently can be done under the current constitution, but broader reforms such as reducing presidential powers would need approval of the Supreme Court and a two-thirds parliamentary majority. It isn’t clear when the bill will be introduced for debate.
Violence erupted on May 9, when Rajapaksa supporters attacked peaceful protesters. Nine people including a governing party lawmaker were killed and homes of Cabinet ministers burnt down. The unrest nearly dismantled the Rajapaksa dynasty after the president’s brother, Mahinda Rajapaksa, resigned as prime minister. Three of the president’s siblings and a nephew had already quit their Cabinet posts.
Sri Lanka has been ruled by a powerful executive presidential system for nearly 45 years, and President Gotabaya Rajapaksa strengthened it further with constitutional changes as soon as he was overwhelmingly elected in 2019.
Wickremesinghe has said that he will have an economic reform plan ready within two weeks to seek approval from the International Monetary Fund for a bailout package.