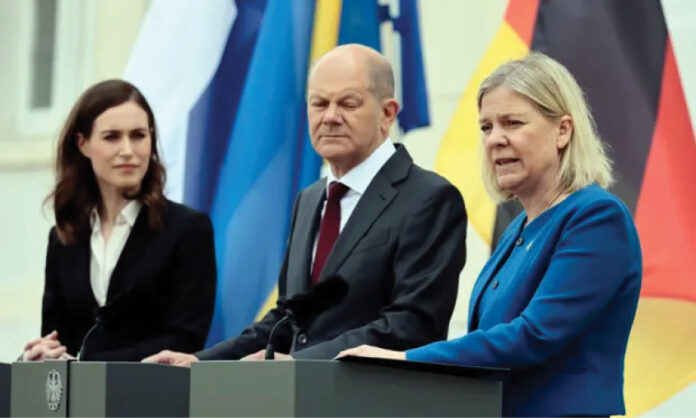 Stockholm
The first signs of a backlash to a possible Swedish application to join Nato have emerged within the ruling Social Democrats, at the start of a critical month in which Sweden and neighbouring Finland are expected to move rapidly towards a decision.
Sweden is due to publish a security policy assessment report by 13 May, two-weeks earlier than planned, which will involve representatives of all parties in Sweden’s parliament, the Riksdag.
The foreign ministry is also due to issue a position paper, before a decision is taken by the coalition government, no later than 24 May. The Social Democrats are eager to avoid a split over an issue that challenges nearly 200 years of Swedish neutrality with a national election in the autumn.
However, local media in Sweden reported the climate and environment minister, Annika Strandhäll, who is also the federal board chair of the women’s wing of the Social Democrats, as saying the faction had “a long history and struggle in matters concerning peace, disarmament, detente and military freedom of alliance”.
Therefore, Strandhäll said: “[We] in the federal board have decided to remain in line with our congressional decisions that Sweden should be militarily non-aligned and stand outside Nato.”
The Finnish president, Sauli Niinistö, has said he will make his views known by 12 May, giving himself time to react to what Vladimir Putin may say on Russia’s Victory Day on 9 May. Moscow has rejected reports that Putin will declare war on Europe on 9 May but it has threatened unspecified consequences if Nato accepts the two countries as members.
There has been a sudden change in Finnish public opinion towards Russia after the invasion of Ukraine with many voters lacking trust in Russia, with whom Finland shares a 830-mile border.
Surveys of the Finnish parliament show close to two-thirds of ministers are in favour of Nato membership. The ruling Finnish Social Democrats are due to hold a debate on 14 May. The parliament is taking expert evidence on the plan, but opinion polls show steady support for membership in the wake of Putin’s invasion of Ukraine. This increases to 80% if both the prime minister, Sanna Marin, and president back membership. President Niinistö is scheduled to make a two-day visit to Sweden later this month.
The UK’s defence secretary, Ben Wallace, was in Finland on Wednesday in a show of solidarity as British troops took part in a joint exercises with Finnish, US and Estonian troops.
Advocates of Nato membership support a joint application by both Finland and Sweden to be submitted to Nato ahead of its summit in Madrid on 29 June, to give Nato time to respond with an invitation to join. Finland seems determined to join even if Sweden pulls back.
Wallace has been in discussion with the Finnish military about the type of military support the UK, and other Nato powers, could provide in the transition period between application and acceptance of full protection under Nato’s article 5.
It is not expected that Nato forces would be stationed permanently in Finland in the transition period, but joint exercises might intensify.
Finland has not experienced an increase in activity along its border with Russia, or disinformation attacks. But the country has taken steps to minimise its dependency on Russian energy by next winter.