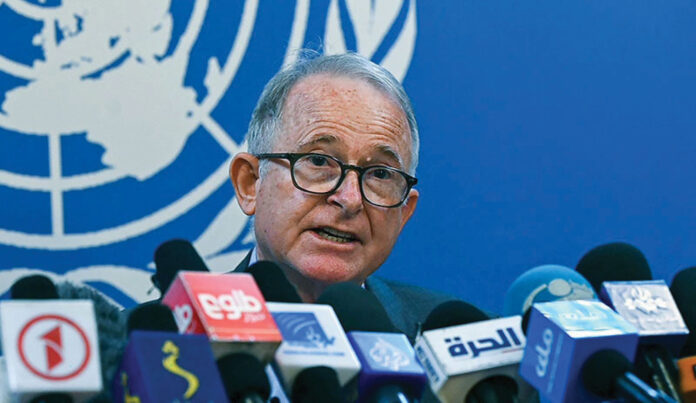 Washington
The Taliban government’s restrictions on women are aimed at making them “invisible” in Afghan society, a UN human rights observer said on Thursday during a visit to the nation.
Since the Taliban stormed back to power last year, they have imposed harsh restrictions on women and girls.
Teenage girls have been shut out from secondary schools, while women have been forced from some government jobs and barred from travelling alone.
This month Afghanistan’s supreme leader and Taliban chief Hibatullah Akhundzada ordered women to cover up fully in public, including their faces.
These policies show a “pattern of absolute gender segregation and are aimed at making women invisible in the society”, Richard Bennett, UN special rapporteur on human rights in Afghanistan, told reporters in Kabul.
“The de facto authorities have failed to acknowledge the magnitude and gravity of the abuses being committed, many of them in their name,” Bennett said.
His comments came as Taliban fighters on Thursday broke up a women’s protest calling for the reopening of secondary schools for girls.
“Angry Taliban forces came and dispersed us,” Munisa Mubariz, an organiser of the rally, told AFP.
In March the Taliban ordered all secondary schools for girls to shut, just hours after opening them for the first time since taking power in August.
The government has yet to offer a clear reason for the decision, but officials claim the institutions will reopen soon.
Foreign governments have insisted the Taliban’s record on human rights, especially women’s rights, will be key in determining whether the administration will be formally recognised.
During two decades of US-led military intervention in Afghanistan, women and girls made marginal gains in the deeply patriarchal nation.
Some Afghan women initially pushed back against the new Taliban curbs, holding small protests where they demanded the right to education and work.
But hardliners soon rounded up the ringleaders, holding them incommunicado while denying that they had been detained. Since their release, most have gone silent.