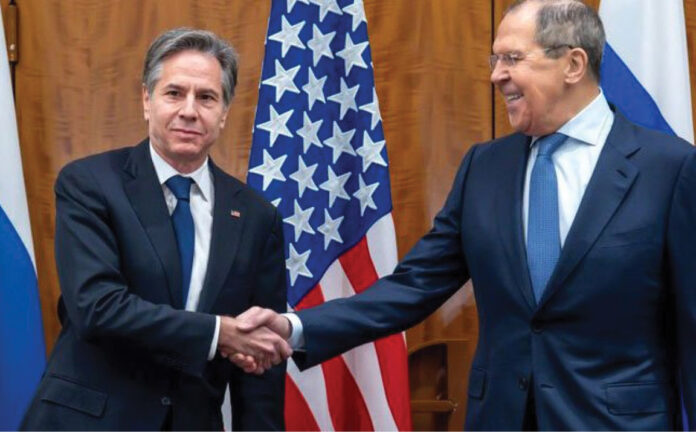 The United States, keeping in view the Moscow’s reservations, promised a written response to Russian security requirements next week
GENEVA
Washington and Moscow’s top diplomats on Friday agreed to keep working to ease tensions over Ukraine, with the United States promising a written response to Russian security requirements next week and not ruling out a presidential meeting.
As fears grew that Russia could invade its pro-Western neighbour, US Secretary of State Antony Blinken renewed warnings of severe Western reprisals as he met for 90 minutes with Foreign Minister Sergei Lavrov in Geneva.
The Russian foreign ministry said later that in his talks with Blinken, Lavrov had vowed “the most serious consequences” if Washington kept ignoring Moscow’s security demands.
Blinken described the high-stakes talks as “frank”, with Lavrov also voicing hope for a lowering of the temperature between the former Cold War foes.
Russia has massed tens of thousands of troops on the Ukrainian border, denying it plans to invade but demanding security guarantees, including a permanent ban on the country joining NATO.
Blinken said that Washington will share written ideas with Russia next week in which it will also make clear its own positions.
“We didn’t expect any major breakthroughs to happen today, but I believe we are now on a clear path in terms of understanding each other’s concerns and each other’s positions,” Blinken told reporters.
“We anticipate that we will be able to share with Russia our concerns and ideas in more detail in writing next week and we agreed to further discussions after that,” he added.
Speaking separately, Lavrov told reporters: “Antony Blinken agreed that we need to have a reasonable dialogue, and I hope emotions will decrease.”
He added that another meeting could be held between the two, but that it was “premature” to start talking about another summit between Presidents Joe Biden and Vladimir Putin, who met in Geneva last June.
Blinken, however, did not rule out fresh talks between the presidents after Biden twice warned Putin by telephone of consequences for any Ukraine invasion.
“If we conclude (and) the Russians conclude that the best way to resolve things is through a further conversation between them, we’re certainly prepared to do that,” Blinken said.
Biden bluntly assessed on Wednesday that Putin is likely to “move in” on Ukraine and warned of a “disaster for Russia”.
A senior US official, speaking to reporters later Friday, said Washington was preparing to send proposals to the Russians and was in close coordination with “our allies”.
“The United States does not plan a public release,” she said.
– ‘Chance to avoid catastrophe’ –
In Kyiv, Ukrainian officials welcomed the continuation of talks.
“Good to know that diplomatic track of contacts with Russia remains active,” tweeted Foreign Minister Dmytro Kuleba after speaking with Blinken, adding the two also discussed further strengthening Ukraine’s defences.
“Russia now has a chance to avoid a catastrophic scenario,” President Volodymyr Zelensky’s aide Mykhailo Podolyak told AFP.
Russia, which already fuels a deadly insurgency in eastern Ukraine that has killed more than 13,000 people since 2014, has demanded guarantees that NATO never admit the former Soviet republic or expand otherwise in Moscow’s old sphere.
The United States has declared the idea a “non-starter”.
Earlier on Friday Russia reiterated demands for the “withdrawal of foreign forces, hardware and arms” from countries that were not NATO members before 1997, this time singling out Bulgaria and Romania, two former Warsaw Pact countries that joined NATO in 2004.
Romania’s foreign ministry quickly hit back, calling the demand “unacceptable”.
NATO rejected the demand saying it would “not renounce our ability to protect and defend each other, including with the presence of troops in the eastern part of the Alliance”.
Blinken headed to Geneva after a trip to Kyiv and talks with Britain, France and Germany in Berlin.
Even while rejecting the core Russian demands, the Biden administration has said it is willing to speak to Moscow about its security concerns.
One proposal by Washington is to revive restrictions on missiles in Europe that had been set by the Intermediate-Range Nuclear Forces Treaty, a Cold War deal trashed by then- president Donald Trump’s administration as it accused Moscow of violations.
– US says clock is ticking –
The Biden administration has also offered more transparency on military exercises.
Russia has not rejected the proposals but says that its core concern is Ukraine and on Thursday announced massive naval drills as a show of force.
The United States has warned that the clock is ticking, putting forward intelligence alleging that an invasion could come shortly and be preceded by a “false-flag” operation as Russia tries to trigger a pretext against Ukraine.
Blinken said he asked Lavrov to prove Russia has no intention to invade.
“If Russia wants to begin to convince the world that it has no aggressive intent toward Ukraine, a very good place to start would be by de-escalating, by bringing back — removing — those forces on Ukraine’s border,” he said.
Lawmakers in Russia’s parliament have presented a bill that would ask Putin to recognise the independence of two pro-Moscow separatist territories in Ukraine, Donetsk and Lugansk.
Ukraine’s military intelligence service on Friday accused Russia of sending fresh arms and equipment to the separatists since the start of this month.