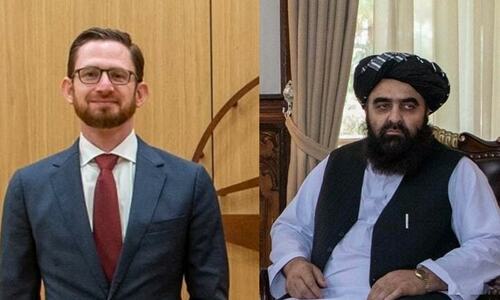 This was the first in-person talks between the two sides in more than three months and the two sides agreed to continue their talks, said a Taliban statement issued after the meeting.

The United States does not recognise the Taliban government and a US official warned earlier this week that the Doha talks should not be interpreted as diplomatic recognition of Kabul’s current rulers.

Muttaqi’s spokesman Abdul Qahar Balkhi wrote on Twitter after the meeting that a US Treasury Representative also attended the meeting and spoke about their discussions with “the US Justice Department and other legal experts on frozen Afghan assets”.

The Afghan delegation included officials from the finance ministry and the Afghan Central Bank, Balkhi added, confirming that the talks focused on “unfreezing Afghan assets”.

The US media reported earlier this week that the US and Taliban officials were working on a mechanism to allow the Afghan central bank to access the frozen funds.

The US Treasury withheld about $7bn of Afghan assets after Taliban fighters captured Kabul in August 2021. Median reports suggested that the Taliban were also seeking US support for unfreezing $2b held in European banks.

In February, US President Joe Biden freed half the $7 billion, to be used to benefit the Afghan people. The rest was held for ongoing terrorism-related lawsuits in US courts against the Taliban.

Most Afghans, including the Taliban and their opponents, want the United States to release the entire amount of $7bn.

A State Department spokesperson confirmed to the Voice of America news service that the Biden administration was “working to help find an appropriate mechanism that can serve as a steward of the $3.5 billion that President Biden set aside”. The spokesperson added that Washington was “urgently working to address complicated questions about the use of these funds to ensure they benefit the people of Afghanistan and not the Taliban”.

Balkhi said the Taliban foreign minister stressed that engagement with his government “should be cooperative and positive instead of pressure tactics to achieve progress”. Balkhi claimed that the US delegation assured them that Washington “preferred engagement and sought a stable Afghanistan”. US officials also said that Washington “did not support any armed opposition in Afghanistan” and called such actions “detrimental” to that country, Balkhi said.

The Taliban claimed that Muttaqi renewed his government’s commitment for not allowing anyone to use Afghan territory to harm neighbouring and other countries.