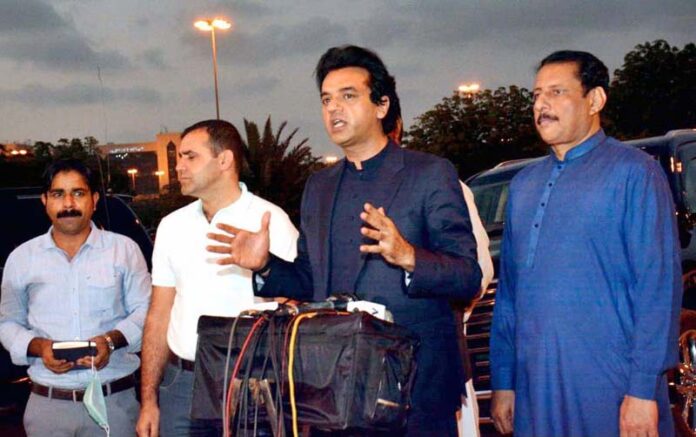 PESHAWAR
Special Assistant to the Prime Minister on Youth Affairs Usman Dar Thursday inaugurated Kamyab Jawan Sports Drive Inter-University Men Badminton Championship being played under the aegis of Directorate of Sports University of Peshawar here at Campus Indoor Hall.
Speaking at the inauguration ceremony, Special Assistant to Prime Minister on Youth Affairs, Usman Dar said that all the youth of the country, including Khyber Pakhtunkhwa, are being provided opportunities to move forward.
He said the best platform through Kamyab Jawan Program has been provided to the youth. He said, they are working in light of the vision of the Prime Minister of Pakistan Imran Khan wherein he wants to help out the youth of Pakistan in different sectors through Kamyab Jawan Program.
Taking forward the vision of Prime Minister Imran Khan, steps are being taken for the development of the country and the nation. Loans of up to Rs. 3 billions have been distributed among the youth for establishment of their own business.
At the same time, a series of ‘Volleyball Academy’ under the successful youth program at the University of Peshawar is being set up and ‘Green Clubs’ are being set up. Kamyab Jawan Sports Drive Program is the largest sports program in the country’s history, Usman Dar said. He said more than 10,000 Skill Scholarships have been awarded to the youth. He said, Green clubs and Kamyab Jawan Sports Drive are being set up at the University of Peshawar.
He said, Kamyab Jawan Sports Drive is a stepping stone to success for every youth. “We have included youth in every program and the Youths are not being rewarded on the basis of performance,” he added.
He said in the past, such facilities had been linked with party affiliation but now the Program is for all without any party affiliation according to the vision of the Prime Minister.
“We will not run this program on political grounds,” Special Assistant to the Prime Minister on Youth Affairs Usman Dar said. He said that for the first time in the country’s history Kamyab Jawan Sports Drive Program and Higher Education Commission in collaboration four new programs worth four billion rupees to engage youth in extracurricular and sports activities. Kamyab Jawan Sports Drive is one of the mega projects wherein in the first phase, the project will provide an opportunity to the talented youth of Pakistan to prepare themselves for displaying their skills at the international level in 12 sports including hockey, cricket, football, handball, wrestling, weightlifting, squash, volleyball, skiing, judo, boxing and athletics.
Youths including girls in the age group of 11 to 25 years are going to participate in the sports competitions so that they should come up at national and international levels. The sports competitions will be held all across the country including all the four provinces, Gilgit Baltistan and Azad Jammu and Kashmir and one million youth will go through a process of selection, Usman Dar said.
VC UoP Prof. Dr. Muhammad Idrees, DG PSB Col (retd) Asif Zaman, DG HEC Javed Memon and Secretary Higher Education Daud Khan also spoke and highlighted the usefulness of the Kamyab Jawan Program. They declared the Kamyab Jawan Program as a revolutionary move initiated by the Prime Minister of Pakistan Imran Khan to hunt talent at the grassroots level in different Games. Under such a program, Pakistan would be able to regain its lost glories in different Games, they added.
A total of 111 universities teams participated in the Badminton Championship in eight different zones held across Pakistan and now out of 111 teams 16 teams qualified for the final round, being hosted by the UoP.
Head of the Kamyab Jawan Sports Drive Miss Anila, DG Pakistan Sports Board Col (retd) Asif Zaman, DG HEC Engineer Javed Memon, Former British Squash Champion Qamar Zaman, VC University of Peshawar Prof Dr Muhammad Idrees, Secretary HED Daud Khan, DG Sports KP Khalid Khan, DG Sports University of Peshawar Bahre Karam, Syed Azhar Ali Shah, President Pakistan Cycling Federation, Nisar Ahmed, President KP Cycling Association, Director Sports and FIFA Referee Muhammad Ali, Assistant Registerer UoP Noorzada, Director Sports Islamia College University Ali Hoti, Director Sports Abdul Wali Khan University Farooq Hussain, International Handball Player Sami Marwat, Director Sports Government College Peshawar Arshad Hussain and other personalities were also present.
University badminton teams qualified for the final round including host University of Peshawar, University of Punjab Lahore, Quaid-e-Azam University Islamabad, Balochistan University of Information Technology, Abdul Wali Khan University Mardan, Quaid-e-Azam University of Engineering Sciences and Technology Nawabshah and University of Bannu, Superior University Lahore, Government College University Lahore, University of Swat, Government College University Faisalabad, National University of Modern Languages (Namal, Islamabad), Institute of Business Management Karachi, University of Lahore and University of Central Punjab Lahore. The competition will continue till February 19. The team of University of Punjab Lahore is defending the title.