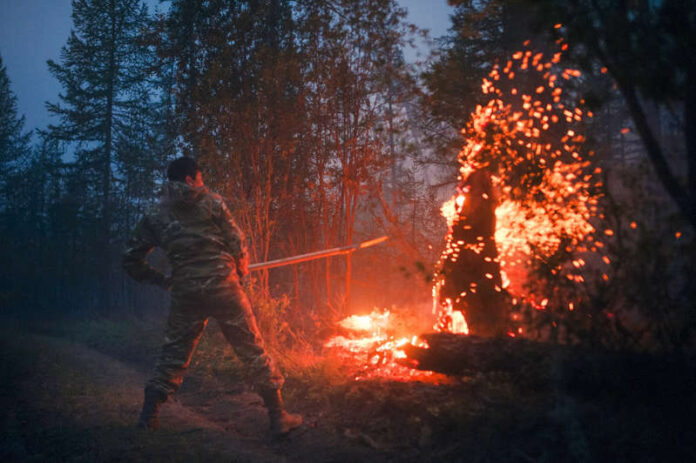 The little domed tents of the volunteer firefighters in the clearing of a Siberian forest can be hard to see — even from only a few steps away — because of the choking smoke. Their shovels and saws seem to be tiny tools against the vast blaze, like toy weapons brought to a war.

But their love of the vast and wild region is a powerful motivator in a summer of sprawling fires that might become Russia’s worst ever.

As of Monday, about 1.88 million hectares (4.6 million acres) of forest were burning in Russia — an area larger than the U.S. state of Connecticut.

More than 5,000 regular firefighters are involved, but the scale is so large and the area is so enormous that 55% of the fires aren’t being fought at all, according to Avialesookhrana, the agency that oversees the effort.

That means the volunteers, who take time off work and rely on their own money or nongovernmental funds, are a small but important addition to the overwhelmed forces.

“The guys (volunteers) are doing a great job. Their help is significant because the area and distances are quite large, so the more people there are, the more effective our efforts are to control the fires,” said Denis Markov, an instructor at a base for paratrooper firefighters in Tomsk, who is working with some of the volunteers.

The hardest hit area is the Sakha Republic, also known as Yakutia, in the far northeast of Russia, about 5,000 kilometers (3,200 miles) from Moscow. About 85% of all of Russia’s fires are in the republic, and heavy smoke forced a temporary closure of the airport in the regional capital, Yakutsk, a city of about 280,000 people.

As the smoke intensified, Ivan Nikiforov took a leave from his office job in the city — not to escape the bad air but to head into the fires as a volunteer.

“I think it’s important to participate as a volunteer because our republic, our shared land and our forests are burning. This is what we’ll be leaving for our children and our grandchildren,” he said at his group’s encampment in the Gorny Ulus area west of Yakutsk.

Nikiforov and a small contingent of other volunteers firebreak trenches, chop down trees and set small controlled fires to try to block the spread.

Volunteers in the area received some support from the nongovernmental agency Sinet-Spark, which provided sleeping bags, gloves and heavy equipment. Alexandra Kozulina, the group’s director of projects, said Sinet-Spark initially had planned to spend its money on information campaigns but decided to provide equipment as the fires worsened.

“I also believe our government should be doing this. I don’t understand why it isn’t happening — whether there isn’t enough money because budgets were cut, or some other reason, but we are doing what is in our power,” she said.

The main problem, many observers say, is that the size of the aerial forest protection agency has been reduced, along with the number of rangers.

“I can personally remember how each district had a branch of Avialesookhrana with 15-20 paratroopers. They constantly made observation flights and put out fires as soon as they started,” said Fedot Tumusov, a member of the Russian parliament from Sakha.

The 2007 changes that reduced the number of rangers also gave control over timberlands to regional authorities and businesses, eroding centralized monitoring, fueling corruption and contributing to illegal tree-cutting practices that help spawn fires.

Critics also say the law allows authorities to let fires burn in certain areas if the potential damage is considered not worth the cost of containing them. They say this encourages inaction by authorities and slows firefighting efforts, so a blaze that could have been extinguished at a relatively small cost is often allowed to burn uncontrolled.

This year’s fires in Siberia already have emitted more carbon than those in some previous years, according to Mark Parrington, a senior scientist at the European Centre for Medium-Range Weather Forecasts.

He said the peat fires that are common in Siberia and many other Russian regions are particularly harmful in terms of emissions because the peat has been absorbing carbon for tens of thousands of years.

“Then it’s releasing all that carbon back into the atmosphere,” Parrington said.

While pledging adherence to the Paris agreement on climate change, Russian officials often underline the key role played by the country’s forests in slowing down global warming. However, regular fires have the opposite effect, dramatically boosting carbon emissions.

“Everyone emphasizes that we have huge forests, but no one so far has calculated how much our forest fires contribute to greenhouse gas emissions,” said Mikhail Kreindlin of Greenpeace Russia.

It’s too early to tell whether this year’s fires will reach a record-breaking scale, Kreindlin says, noting that the situation in Siberia has been particularly difficult for the past three years. What sets 2021 apart is that Karelia — a small region in northwestern Russia on the border with Finland — also has been engulfed by devastating, unprecedented fires.

As of Monday, Karelia was among the top three regions affected by the fires, according to Avialesookhrana, with 22 of them still active on more than 11,000 hectares (27,180 acres).

“The fact that Karelia got ablaze so unexpectedly — there were fires there before, but there hasn’t been such massive fires there in many years — shows that in general the situation with the fires in the country is extremely difficult and poorly controlled,” Kreindlin said.

Volunteers have helped in Karelia as well. Anna Gorbunova, coordinator with the Society of Volunteer Forest Firefighters that focuses on the Ladoga Skerries national park in Karelia, told The Associated Press last week that the blazes there this year are the biggest since 2008.

As of July 20, the group counted 32 fires in the national park throughout the summer. “And it’s only been half of the summer, so it’s an absolute record throughout all these years,” Gorbunova said.