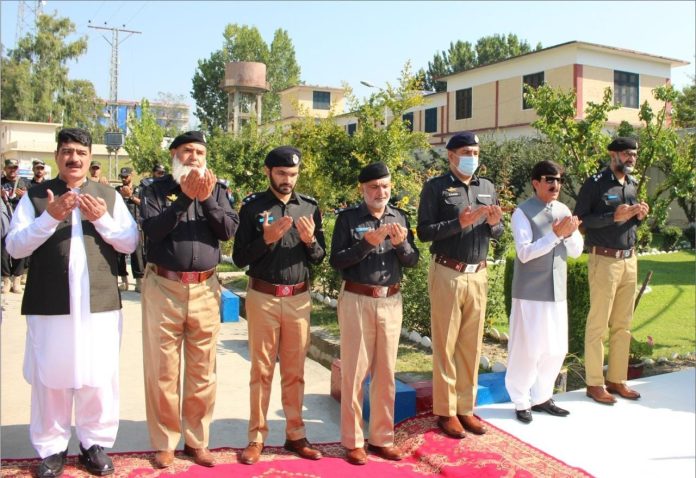 SWAT
A number of events were held in connection to mark Police Martyrs Day in Swat to acknowledge sacrifices of all brave police officers and personnels who sacrificed their lives for peace in the region.
To express solidarity with their families Swat Police organized grand function at Javeed Iqbal Shaheed Police Lines Kabal in which Commissioner Malakand Shaukat Yousafzai, RPO Malakand Zeeshan Asghar, DPO Swat Zahid Nawaz Marvat, a large number of policemen, relatives of Shuhada, Parliamentarians, representitives of traders Union and elders of the valley participated.
Tribute were paid to the police martyres and Quran Khawani was held at Jamia Masjid Javeed Iqbal Shaheed Police Lines Kabal. On this occasion Special prayers were offered for peace, solidarity and prosperity of the country.
According to Police, 159 police officers and personnel were martyred while 191 personnel fought bravely and got the rank of Ghazi in the war against terrorism in Swat district.
It is pertinent to mention here that during the War against terrorism, Swat Police personnels did tremendous Job and rendered their life’s for the peace and came as a ‘’ first line force” against the Taliban worriers in back in 2007 to 2010.
Talking on the occasion to our Correspondent DPO Swat Zahid Nawaz Marvat has said that i feel pride as a custodian of 150 shuhada and three thousands GHAZIS and I express my commitment to stand by the families in all thick and thin. He said we here to serve the community and our doors are open to public.
He said that the district police is express it’s commitment to main order in the Swat at all cost and will never allow miscreants in any shape to jeopardise peace of the district. Later on, Commissioner Malakand Shaukat Yousafzai and DIG Malakand Zeeshan Asghar distributes gift packs among the shuhada families.