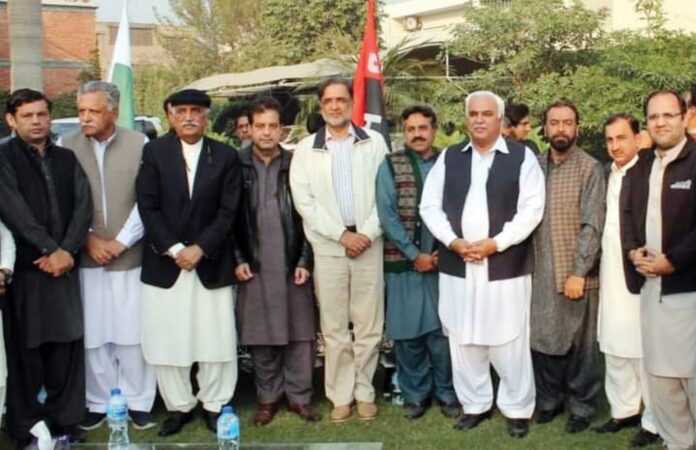 Peshawar
Pakistan People’s Party demanded supreme court that a suo motu notice be taken of the reports about the alleged involvement of former chief justice of Pakistan Mian Saqib Nisar, adding that audio tape in which the latter denied bail to former prime minister Nawaz Sharif and his daughter.
Addressing a press conference at Peshawar Syed Khurshid Shah said that the former chief justice should not avoid court in the matter, adding that if he did not want to go to court then audio tape would be considered correct.
While addressing a press conference at the residence of Syed Zahir Ali Shah he criticized Pakistan Tehreek-i-Insaf (PTI) government economic policies.
On this occasion, Khursheed Shah said that in all our tenures, we have fulfilled all the promises including providing employment to the people, raising the standard of living.
Today the overall condition of the economy and other sectors are pathetic and with each passing day inflation increasing and growth rate declining, he added. The PPP leader demanded fresh elections in the country , adding that all opposition parties were on the same page in the house.
Khurshid Shah said that PPP has no differences with PML-N over the electronic voting machine and both are on the same page on many issues created by the incumbent government.
The law of electronic voting machines will never work, the Election Commission itself has opposed the AVM, he added.
We also think that this law was brought in the wrong way. The present government should be sent home immediately otherwise the situation will get worse. If there was inflation during PPP rule but salaries were also increased by 135%.
PPP leaders later on visited Peshawar Press Club and met with the newly elected cabinet of the Khyber Union of Journalists.

No care taker govt is coming, Imran will complete his tenure: Sheikh Rashid