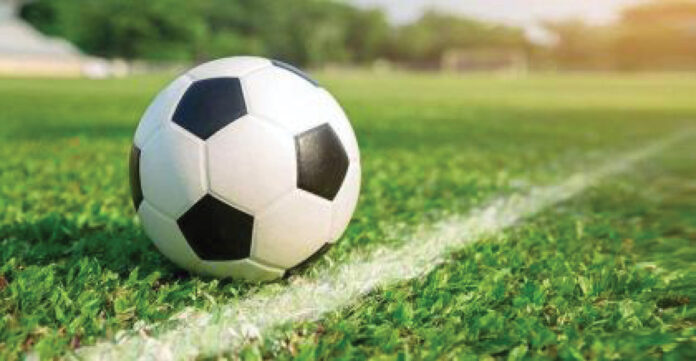 PESHAWAR
Young Star Bajaur upset Bajaur Star by 2-1 in a thrilling final of the football match part of the 75th Independence Day celebration organized by District Administration, Sports Association Merged Area and Frontier Corps Khyber Pakhtunkhwa North on Friday.
The final match between Young Star Bajaur and Bajaur Star witnessed a capacity crowd present on this occasion along with officials of the district administration and Frontier Corps Khyber Pakhtunkhwa North.
The final started at a slow pace and soon it took momentum when Bajaur Star took the lead through Jan Alam, the right winger, who got a free ball from his mid-fielder Sajjad Ahmad. After receiving the ball from his midfielder, he zoomed in and slammed a beautiful goal on the field attempt.
After taking lead, Bajaur Star kept up more pressure to consolidate their lead but due to pack defence of Young Star Bajaur the Bajaur Star players did not succeed and thus the first-half ended in favour of Bajaur Star with a goal lead,
It was the second session wherein Young Star Bajaur managed their position despite conceding a goal in the first session and soon succeeded in leveling the lead through center striker Inam Ullah on the field attempt.
Inam got a free ball from the right winger Shakir Ullah and did nothing wrong in dispatching it into the net to make the tally 1-1. Inam’s goal really fascinated Young Star Bajaur and their players made some key moves as result it was in the dying moments when Young Star Bajaur scored a superb goal through Barkat Ullah on the field attempt.
Barkat Ullah, the left winger, travelled past three defenders before netting a fine goal from the top of the box area to make the tally 2-1. Bajaur Star after going into deficit tried their hardest to level the tally but failed and thus Young Stars Bajaur won the final match by 2-1. Akram and Zahid supervised the match while Ibrahim Khan acted as match commissioner.
At the end, the chief guest Nawabzada Naseemuddin Khan along with the officials of the District Administration, Sports Association Bajaur and officials of the Frontier Corps Khyber Pakhtunkhwa North, gave away trophies, medals and certificates.
The players on this occasion also presented traditional “Atharn” wherein local arts display melodious Doll (drums) and Surna (Pipe). There were more joys and enthusiasm between all the players in the football event organized in connection with the 75th Independence Day celebration.
During his brief chat, Nawabzada Naseemuddin Khan urged the players to take active part in sports. The aim of the Championship is to promote healthy activities and establish an atmosphere of peace and brotherhood, he added. The people and especially the youth of Bajaur appreciated the organization of this sports Championship and paid tribute to Frontier Corps.