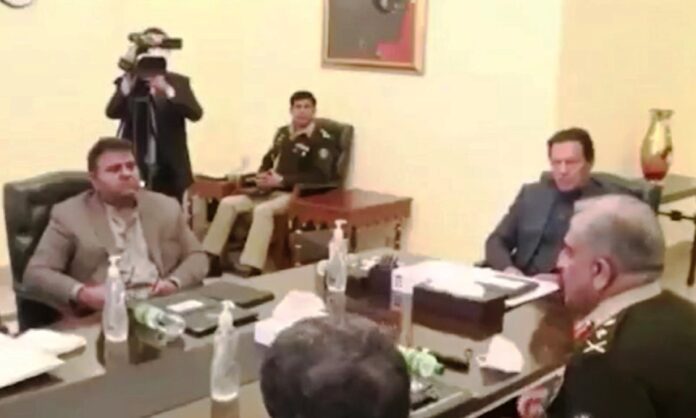 After Sialkot lynching
PM Imran, Gen Qamar and others call for ensuring strict punishments to all involved in lynching of foreign national
Islamabad
Prime Minister Imran chaired a high-level meeting of the country’s civil and military leadership on Monday to review the overall security situation in Pakistan after the brutal mob lynching of a Sri Lankan national in Sialkot last week.
The meeting was attended by Chief of Army Staff General Qamar Jawed Bajwa, National Security Adviser Dr Moeed Yousuf, Information Minister Fawad Chaudhry, Interior Minister Sheikh Rashid Ahmed, Punjab Chief Minister Sardar Usman Buzdar and other senior military and civil officers. According to a statement issued by the Prime Minister’s Office, the participants resolved to bring the perpetrators involved in the Sialkot lynching to justice.
A mob comprising hundreds of protestors, including the employees of a factory where Priyantha Kumara worked as a manager, had tortured him to death on Friday and later burnt his body over blasphemy allegations.
Subsequently, a first information report was registered against 900 workers of Rajco Industries, and scores of suspects have been arrested since then.
According to the the PMO, the participants of today’s security meeting were of the view that individuals and mobs could not be allowed to take the law into their hands and such incidents could not be tolerated.
The country’s civil and military leadership expressed serious concern over Kumara’s lynching, stressing the need for implementing a comprehensive strategy to curb such incidents and ensuring “strict punishment” for all the perpetrators, the PMO said. It added that the participants also acknowledged the act of bravery by one of Kumara’s colleagues, Malik Adnan, who was seen confronting a group of angry men in an attempt to save the former in a video of the incident.
“Malik Adnan […] endangered his own life to save Priyantha Kumara,” the PMO’s statement said, adding that the participants of the meeting also conveyed their deepest condolences to the family of late Kumara.