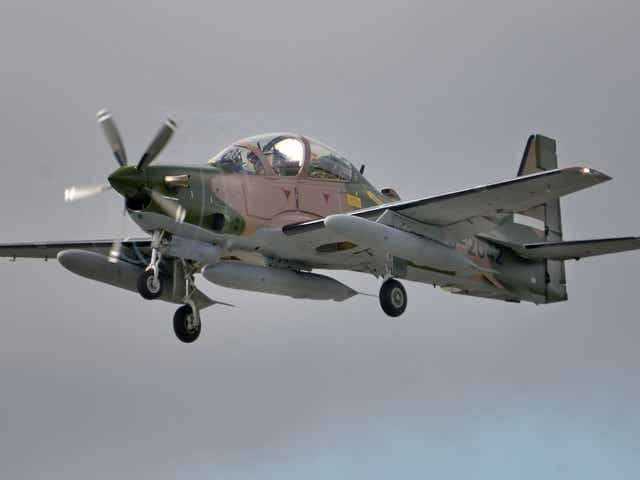 Agreements with US authorities may hinder the Nigerian military ability to use the Tucano fighter jets against armed bandits
The jets are only to be deployed against terrorists according to the terms of sale to the Nigerian authorities
The situation has prompted the military to push for the bandits operating the northwest to be declared terrorists
FCT, Abuja – A report by The Punch newspaper has revealed why the Nigerian military has yet to deploy the newly-acquired Tucano jets against armed bandits who have laid siege in the northwest and parts of the north-central regions of the country.

According to the report, military authorities informed the National Assembly that the agreement signed with the US government is that the fighter jets would only be deployed against terrorists and insurgents, and not bandits.

The complaints by the service chiefs led to the recent demand by the Senate and the House of Representatives that bandits should be designated as terrorists.

The Nigerian government in February 2018 placed an order for 12 of the fighter jets at a cost of $496million.

The Nigerian Air Force has since taken delivery of all the jets planes but Nigerians have been asking why they have not been deployed against the bandits.

A top source in one of the security committees in the National Assembly said:

“Let me tell you the truth. We once asked the Armed Forces why they had not deployed the Tucano in the fight the bandits and one of the service chiefs (name withheld) told us that their hands are tied due to the human rights regulations regarding the aircraft.
“He told us that the equipment is meant for the war against terrorists and insurgents and since these are bandits, they cannot be deployed.
“He actually told us that once the bandits have been designated as terrorists, they would be wiped out. Don’t forget that the bandits today are not different from Boko Haram, looking at their activities and the gravity of attacks by them.”
The federal government says it has taken delivery of the final batch of the 12 A-29 Super Tucano fighter jets expected from the United States.

Meanwhile, the minister of information and culture, Lai Mohammed, has disclosed that Nigeria has received all Tucan fighters jets from the US.

He said this in an interview with a Television Continental, posted on the Facebook page of the ministry.

“All the 12 Super Tucano fighter jets have been received. As of this morning, all the 12 were here and they have been deployed to the northeast. We can see that the Tucano jets are actually game-changers.’’
Bandits killed by airstrike, ground troops in Kaduna state
In a related development, over 50 bandits have been reportedly killed by a combined ground and air assault by the Nigerian military in Birnin Gwari local government area of Kaduna state.

This information was revealed in a statement sent to Legit.ng by the Kaduna state commissioner for internal security and home affairs, Samuel Aruwan.

According to the statement, a Nigerian Air Force helicopter gunship provided close air support to ground troops advancing from the Dogon Dawa-Damari-Saulawa axis and decimated the bandits.

How soldiers killed over 40 bandits in Kaduna, Sokoto recently
Recall that Brigadier-General Benard Onyeuko, Acting Director, Defence Media Operations, on Thursday, October 14 disclosed that Nigerian troops carried out operations in forests within Sokoto and Kaduna states killing over 40 bandits in the process.

He spoke at the Defence Headquarters, Abuja, while giving updates to journalists on the activities of troops across all theatres of operations between Friday, October 1, and Wednesday, October 13.

He also revealed how several structures which served as bandits’ logistics bases were destroyed.