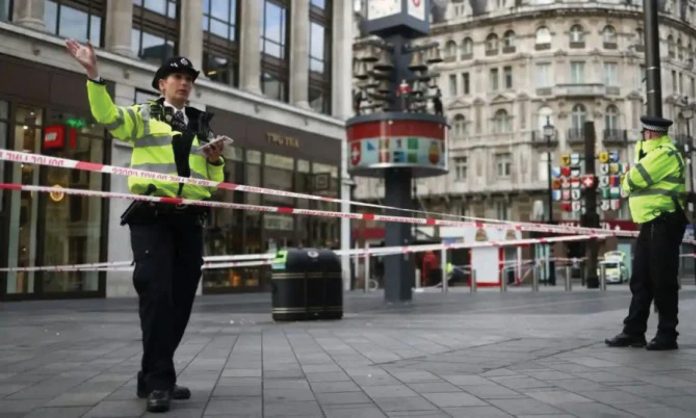 LONDON
Faith leaders in the UK have warned that violent clashes between groups of Hindus and Muslims could spread across the country after a flare up of tensions in the Staffordshire town of Smethwick.
It comes after 47 people were arrested over the weekend in the city of Leicester, with other incidents reported in neighboring towns this week, stirred by intercommunal tensions in the UK and in India, and facilitated by false rumors about violence on social media.
There have also been suggestions that the sectarianism in Leicester was sparked as a result of a cricket match between India and Pakistan on Aug. 28, while the violence in Smethwick may have been prompted by false reports that a Hindu nationalist was due to give a talk at a local temple.
Police have been called to the temple and a mosque in Smethwick for a “search and disperse” operation in a bid to head off further clashes, searching for weapons, fireworks and other suspicious items on people congregating nearby.
They also confirmed that young people were traveling to and from affected areas to stoke tensions, adding to fears that the violence could spread.
Hindu and Muslim community leaders issued a joint statement on Tuesday appealing for calm, which was reiterated on Wednesday.
Ashvani Kumar, a trustee of Smethwick’s Durga Bhawan Center, said: “Interfaith leaders — Sikh, Hindu, Muslim and Christian — were out talking to people and in the end only a few hundred troublemakers turned up.
“Some may have even come from Leicester. We are now trying to make sure this doesn’t happen again.”
The rise of Hindu nationalism in India has also been blamed for prompting the trouble. India’s Prime Minister Narendra Modi has long been accused of Islamophobia and attacks on Muslims across the country have increased during his time in office.
Among the rumors thought to have sparked the clashes was that a Muslim girl had been kidnapped from the area by a group of Hindu men, which police say categorically did not happen.
Footage on Saturday posted to social media, meanwhile, showed a group of young Hindu men in a predominantly Muslim area of Leicester chanting “Jai Shri Ram” — meaning “Glory to Lord Rama” — which has become a favored slogan of Hindu nationalists in India.
Mazhar Mohammed, chair of the trustees at Jamia Masjid in Smethwick, told The Telegraph newspaper: “We’ve lived peacefully in this town together for many years and these tensions have been created overseas by right-wing extremists and brought over to the UK.”
The high commissions of India and Pakistan in London, meanwhile, issued separate statements condemning the violence, calling on authorities to restore order.
A source at the Hindu Council UK told The Telegraph: “Religious leaders have continued to call for calm, but the youths … It’s very difficult. You can’t control them. It’s crazy. It’s going everywhere. I can’t bring myself to say that it will come to London because we want to stop it somehow.”
A Hindu man from Leicester called Vinod told The Telegraph: “Social media is playing a big part in this and there is an agenda — people are looking at creating disarray between communities — not just in Leicester but across all of the UK.
“We’ve been informed that there’s going to be something similar in Nottingham and Coventry. It’s well planned with a narrative of anti-Islam and anti-Hindu sentiment, and it’s the actions of a few fanatics who are trying to get a reaction,” he said.
“My personal opinion is that if we are not careful, it will spread all across Britain, wherever there are south Asian communities,” he added.
A local Sikh, speaking on condition of anonymity, also told the paper that troublemakers were traveling from as far afield as Birmingham, Luton and Bradford.
“There’s a lot of young people behind this, using social media to settle scores,” he said. “People in Leicester are scared to go out in the evenings, especially if it’s dark.”