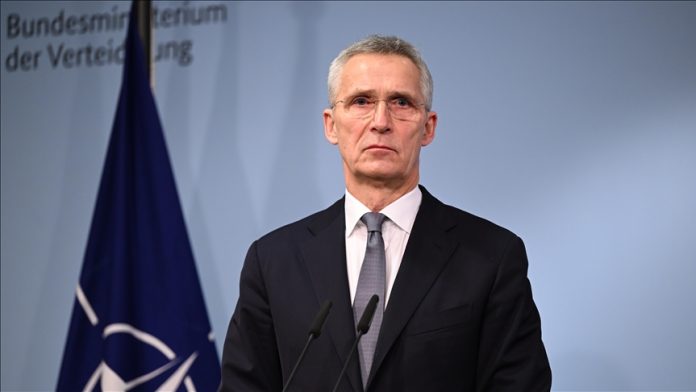 BERLIN
NATO chief Jens Stoltenberg on Tuesday called on Germany and allies to deliver battle tanks and advanced weapons systems to Ukraine.
“At this pivotal moment in the war, we must provide heavier and more advanced systems to Ukraine. And we must do it faster,” Stoltenberg said at a joint news conference with German Defense Minister Boris Pistorius in Berlin.
Stoltenberg warned that Russia is preparing for new offensives and said allies should step up military support for embattled Ukraine.
“Battle tanks are of course important both to be able to repel new Russian offensives, but also for Ukraine to be able to retake territory, and win and prevail as a sovereign independent nation in Europe,” he said.
Stoltenberg added that he had “a good discussion” with Pistorius on Tuesday on the delivery of Leopard battle tanks to Ukraine, saying he is confident that “there will be a solution soon.”
Germany in talks with allies
Pistorius confirmed ongoing talks among allies on the possible delivery of Leopard tanks to Ukraine but also said Berlin has not yet taken a decision on the matter.
“On the question of Leopard tanks, there is no new information,” he told reporters, adding that discussions are still ongoing, and a decision will likely come soon.
The German defense chief said while deliberations are ongoing, European partners that own German-made Leopard tanks can start training missions.
“We are encouraging our partners, if they have available Leopard tanks, they can begin training Ukrainian soldiers, if they want to do so, we would not stand in the way,” he said.
Pressure has been mounting on Germany to provide Ukraine with Leopard 2 battle tanks, but Chancellor Olaf Scholz’s government has been hesitant so far, fearing an escalation of the conflict with Russia.
The German government has repeatedly said that Berlin will not act alone on issues of military support to Ukraine, but will continue to closely coordinate with the US and allies.
Poland and Finland have said they are ready to deliver German-made Leopard 2 tanks to Ukraine, but they need Germany’s approval for third-party transfer.