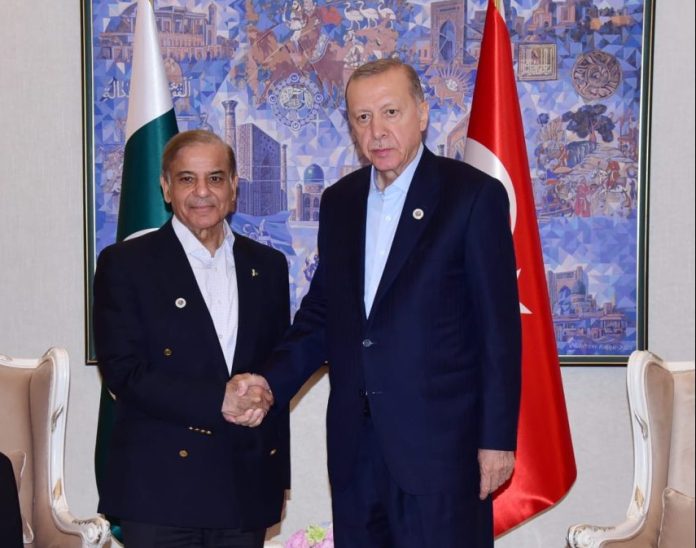 Prime Minister Shehbaz Sharif met with Turkish President Recep Tayyip Erdogan on the sidelines of SCO Council of Heads of State meeting here on Thursday and discussed matters of mutual interest.
The Prime Minister extended his gratitude to President Erdogan and to the people of Turkiye for their solidarity and generous support in the wake of devastating floods in Pakistan, caused by climate change. He added that this support was reflective of the unique longstanding bonds between the two nations.

The Prime Minister expressed satisfaction at the positive trajectory of bilateral relations in diverse areas. Highlighting close fraternal ties between the two countries, the Prime Minister underscored the importance of various bilateral institutional mechanisms, in particular the High-level Strategic Cooperation Council (HLSCC), which served as the leadership-level platform to provide strategic direction to this abiding partnership.

While welcoming the recent signing of “Trade in Goods” agreement between both countries, the Prime Minister expressed the confidence that optimal utilization of the agreement would boost bilateral trade and act as a catalyst in further cementing bilateral economic and investment relations.
The two leaders decided to maintain close contact and continue high-level exchanges to further enhance the multi-dimensional strategic relations between Pakistan and Turkiye.

Later in a tweet on social media, the PM said during his meetings with leaders gathered for the SCO summit, he explained about the flood ravages in Pakistan, caused by climate change.