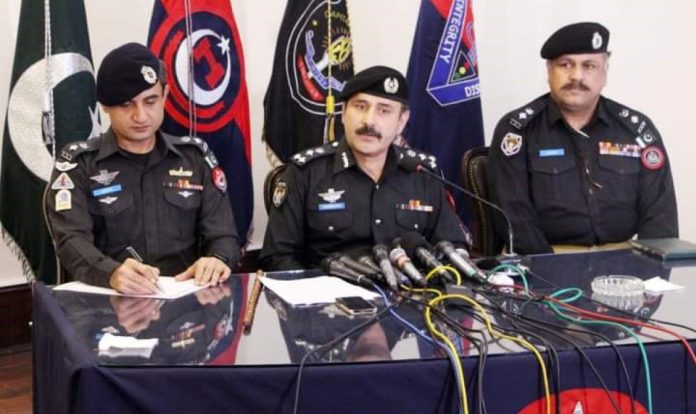 Haqnawaz Shinwari
PESHAWAR
As many as 379 killers and 571 persons involved in alleged attempted murders were arrested by police in the provincial capital during the current year.
The Capital City Police, in a report issued here on Thursday, claimed that incidents of killing have seen an upsurge during the months of June, July and August this year.
The data shared in the report said that during the last three months, 169 cases of murders were reported, of which 47 cases were occurred due to personal enmity.
The fight and verbal altercation took the life of 56 persons while 11 persons were killed in the name of honor and 15 cases of killing reported over property disputes.
The report added that as many as 15 people killed in Peshawar over some unknown personal enmities and 13 people lost lives to their domestic disputes. Similarly, three persons lost lives over children’s fights.
The police in the same period of time claimed to have solved 57 cases of blind murders and arrested 82 accused.
During the first eight months of the current year, Eid, Polio Campaign, Muharram, Chehlum and local body polls security were provided by the police for peaceful conduct.
Police have also conducted search and strike operations in the ongoing year and traced more than 128 gangs involved in robbery, dacoit, theft, and snatching in Peshawar.
It added that a total of 325 accused involved in robbery and dacoits were arrested.
During the course of action, police have seized 312 valuable mobile phones, 36 tolas of gold and Rs 3 lakhs foreign currency including more than Rs 62 million from the arrested persons.
Moreover, 57 valuable stolen vehicles and 175 stolen vehicles have also been recovered from the criminals in different operations.
The statement shared that police have also foiled different bid of terrorism on Sikh community and Shia Imambargahs.
The attack on the Muharram procession was thwarted in which three suicide jackets and 23 hand grenades were recovered and defused.
During this year, 13 attacks were carried out on the police while performing their duties, in which six policemen were martyred and nine police cops sustained serious injuries.
“The prime suspects of Kocha Risaldar suicide attack, Qari Manzoor murder case, SHO Shakeel Khan murder case and several attacks on Intelligence Bureau (IB) officials were held by the police,” it added.
The report added that eight criminals have been in police encounters in Peshawar while 62 accused involved in extortion were traced and arrested.
During same period of time police also traced and arrested a total of 44 accused involved in cases of sexual violence against children.
Information Head 2211 search and strike operations have been conducted to maintain law and order in the city, more than 09 thousand suspects and suspicious persons have been detained and interrogated, in Peshawar and tribal district Khyber.
Police also unearthed around 14 drug factories and 82 accused involved in drug pushing were arrested.
The capital city police in the ongoing year have arrested 6405 accused involved in drug pushing and smuggling and recovered 365 kg of heroin, 683 kg of opium, 2683 kg of hashish, more than 10 thousand ice tablets and more than 02 thousand bottles of alcohol.
Similarly, 2100 accused involved in ice smuggling were arrested and 258 kg of ice was recovered from their possession.
Police claimed that 725 drug addicted persons were admitted to rehabilitation centers in the current year.
During the first eight months of this year, various services were provided to 26060 citizens.
Under the public relation campaign launched by the police, 89 Khuli-ketchries were organized by police in different spots to address the grievances of people.
The police in Peshawar and Khyber arrested more than 5176 anti-social elements, proclaimed offenders. More than 29 explosive fuses and four LMGs and 486 Kalashnikovs were seized from their possessions.
A total of 59 kalakovs, 438 rifles, 214 shotguns, 6507 pistols and 269518 cartridges of various bores were recovered from criminals in the operations.
3454 criminals were arrested, 12073 officials were rewarded in the operation under the transparency and punishment process in the police department.
Actions were taken against 1338 officials for negligence and abuse of authority, the statement read.
The report also mentioned actions against its department officials and shared that so far 60 officials were dismissed while 1278 employees of various types were punished.
The Dispute Resolution Council (DRCs) in different tehsils of the provincial capital have settled disputes between people.
The statement added that DRCs have resolved 560 cases of different nature in different areas of the provincial capital.
The police department also played a key role in recent flash floods in different districts of the province.
As per the report, police officials extended assistance to government line departments in rehabilitation and relief related activities across the province.
During the floods police cops in operation also saved lives of more than 6,000 Afghan families and actively participated in relief efforts, including the evacuation of flood victims.
Policemen cops have also shifted more than 3,000 people to safe places in floods
In order to improve the overall performance of police stations, the department special camera control room in Khan Raziq Shaheed police station was completed in the same period of time.
The tracking system in police vehicles has been further improved to ensure efficient mobile operation.
150 additional cameras permanently installed, Anti-car lifting cell mobile app introduced by the department to prevent theft crimes in Peshawar.
Police Infrastructure and Renovation of Nasir Bagh police station with the support of DHA officials was also completed this year, the report added and said that a new building has been constructed.

We will raise our voice on every forum for the welfare of businessmen: Habib Salarzi