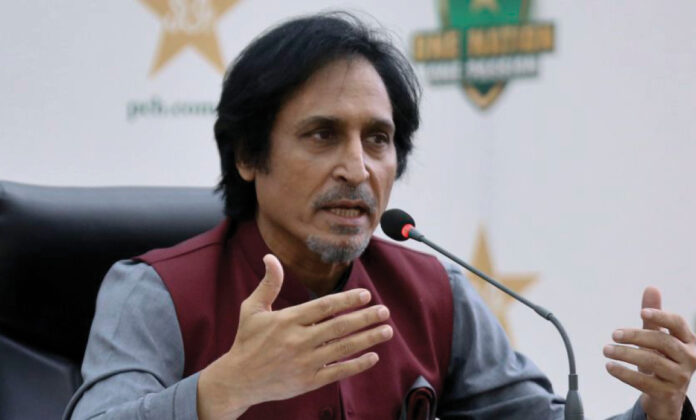 PCB chairman praised young players to bag individual performance awards in Quaid-e-Azam Trophy 2022-23
LAHORE
Pakistan Cricket Board (PCB) chairman Ramiz Raja sent a message to national team ahead of home Test series against England, starting in Rawalpindi on December one.
In an exclusive interview with Geo.tv, Raja said it’s time to Test Pakistan cricket system as a long home season starts.
“We are honored to host England team for Test cricket,” said Raja after he presented Quaid-e-Azam Trophy 2022-23’s title to champions Northern.
“This series is very important for Pakistan team. It is the right time to test our cricket system. I have sent the message to the team, if you want to make headlines in the world, then you need to beat England,” shared the PCB chief.
Confident Raja was upbeat about hosting big teams in the upcoming home season. “The upcoming season is very big for us, I hope everything goes well,” he said.
“England and all other teams will enjoy our hospitality. The world will see us hosting big teams,” he added.
Quaid-e-Azam Trophy 2022-23
Ramiz was ecstatic to watch young players claiming individual accolades. “It is heartening to see young players performing. Especially Huraira, the way this youngster has scored runs at the age of 20, is exceptional,” he praised.
“Our system needs more homework. We need to make our system strong to produce more and more talented players,” opined Raja.
Mubasir Khan (20-year-old) bagged player of the tournament award, Huraira (20-year-old) named player of the final and best batter, Abrar Ahmed (24-year-old) claimed best bowler award, and Rohail Nazir (21-year-old) was declared best wicket-keeper award.
While talking about pitches, Raja once again emphasized on drop-in pitches. “These pitches are not under our control that’s why we gave the idea of drop-in pitches,” he said.
“Drop-in pitches idea is not dropped completely. We are doing homework on it. We need to work on pictures as I want every center to have a different pitch,” the PCB boss shared his vision.
Raja said Pindi Stadium’s pitch was fine but Gaddafi Stadium requires improvement.
It must be noted here that Pindi Stadium’s pitch was issued one demerit point due to poor standard during Australia’s tour to Pakistan earlier this year.
Following the criticism, PCB dug pitches square both in Karachi and Lahore to prepare new pitches after almost 13 years.