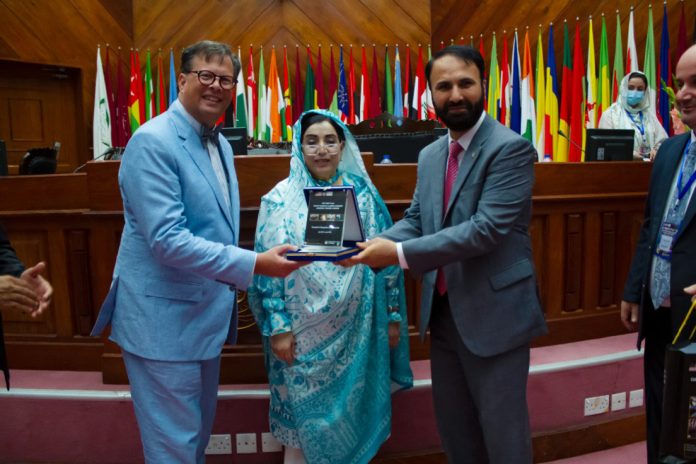 Peshawar
Ms. Shaista Sohail, Acting Chairperson and Executive Director of Higher Education Commission Islamabad has congratulated Kohat University of Science and Technology (KUST) on successful completion of virtual Capacity Building Program for Academic Leadership of Khyber Pakhtunkhwa (KP) Universities in Research, Teaching and Services in 2021-22 and the plans for its scaling up at the national level.
She was the Chief Guest of KUST’s Results Sharing and Scaling up event held at the Auditorium of COMSTECH Islamabad, with over two hundred participants including dignitaries from the US Consulate General Peshawar, Vice Chancellors, and Faculty Members of partner Universities in person and over two hundred participants on virtual mode including VCs and faculty members from Punjab, Sind and Baluchistan.
Ms. Shaista Sohail thanked the US Mission in Pakistan, United States Education Foundation in Pakistan (USEFP) and US Consulate General Peshawar for their support to Higher Education Institutions (HEIs) under U.S. Pakistan University Grants Program (UGP) 2021-22 and extending grants to KUST for the purpose.
The Chief Guest appreciated the efforts of the Vice Chancellor KUST Prof Dr. Sardar Khan and his team and acknowledged the supportive role of the USEFP and HEC. She expressed pleasure about the reported results and scaling up of the project to include the universities across the country and awarded training completion certificates to the training participants.
Mr. Donald Maynard, Public Affairs Officer, U.S Consulate General Peshawar also attended the event in person and congratulated KUST for its successful completion of the 1st Grant and inception of the 2nd Grant awarded by the USEFP.
He thanked the Chairperson HEC for providing patronage to the universities for implementation of the USEFP grants and expressed determination of the United States of America to contribute towards the development of the Higher Education Sector in Pakistan.
Prof. Dr. Sardar Khan VC KUST welcomed the Chief Guest, Dignitaries, VCs and participants. He congratulated the Lead Trainers/KUST Team led by Dr. Zeeshan Khattak and Mr. Inamullah Khan, for successful implementation of the Grant-I and expressed his confidence in the similar show in the implementation of grant-II at national level.
The Vice Chancellors of Partner Universities presented their compliments to KUST, USEFP and HEC and assured to adopt the learning outcomes, and subsequently replicate it at their own for other faculty members.

KP: Over 7 lakh children vaccinated against typhoid in 22 districts