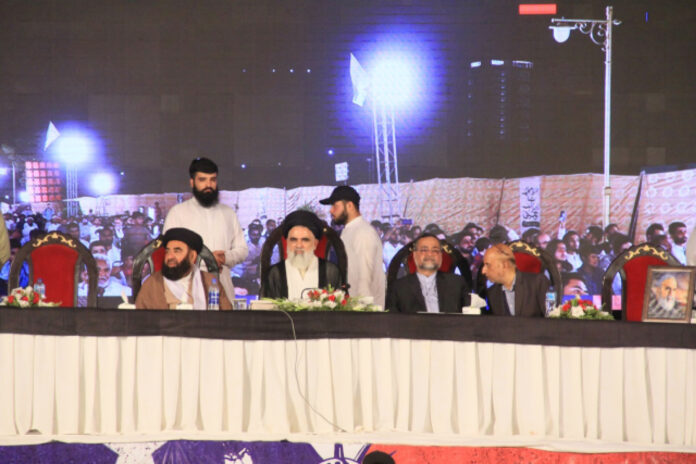 Islamabad
Allama Syed Jawad Naqvi has said that unity among the Muslims is imperative, enemy exploiting segregation and using this divide as a tool to make Muslims weak.
Attacks on the dignity of Holy Prophet (PBUH) and prestigious places of Muslims cannot be tolerated.
While addressing a huge gathering of Tehreek e BaidariUmmat e Mustafa SAWW on Saturday to observe the 33rd demise anniversary of founder of Islamic Revolution, Imam Khomeini R.A, under the title “When Imam Khomeini R.A said U.S the great Satan” at F-9 Park Islamabad he said, Imam Khomeini fought against the biggest devil of world and under his visionary leadership Iranian Muslims had not only taken out Americans but also topple down the regime of their stooges.
America is the ringleader of all terrorism and corruption, he said, and they have huge influence on muslim countries where rulers are weak and are their (U.S) stooges.
This is America who is supporting Israel to oppress Muslims in Palestine.
There is huge pressure on Muslims countries to accept Israel, he said, that is why Arab Kings are racing to accept murderers of Muslims and some conspiracies regarding that, are also taking place in Pakistan but our prideful Muslims will never let this happen.
Jawad Naqvi said the insult of our Holy Prophet (SAW) under the supervision of Modi is unacceptable.
He said people should raise their voices against Indian nefarious designs in the light of Imam Khomeini’s Courageous and Brave Fatwa.
Naqvi also condemned Indian oppressions on Indian Occupied kashmiris and Indian Muslims, and demanded that Muslim countries should end their diplomatic and trade relations with India.
Deputy Secretary Jamiat Ulema Pakistan Allama Haider Alvi declared Imam Khomeini’s life a role model for Muslims and also paid tribute to him on his voice against America.
Allama Charagh Uddin Shah, Senior Journlist Mazhar Barlas and other intellectuals also addressed the gathering.