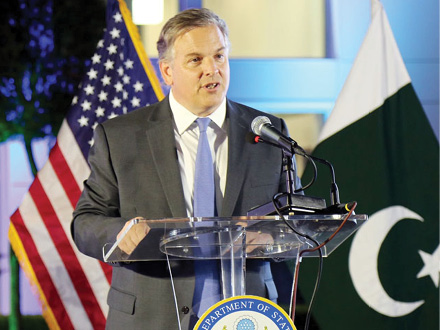 Islamabad
The United States has vowed to support Pakistan in diverse fields, especially for reconstruction and rehabilitation of flood-hit areas of the country.
This was stated by the U.S. Ambassador, Donald Blome on the occasion of the 75th anniversary of the Pak-US diplomatic relations at the U.S. Embassy in Islamabad.
He said that people of the United States continue to stand with Pakistan. He said the strength of Pak-US friendship is demonstrated by more than 66 million dollars in U.S. support for flood response.
Ambassador Blome said, over past 75 years, the United States and Pakistan built a relationship based on mutual respect, shared goals and values.
He further said that over the decades, more than 32 billion dollars in U.S. support benefited Pakistan and improved the lives of the people.
He said the rapidly changing world provides a pivotal opportunity to reframe relations between the two countries.
He showed willingness to advance shared interests in trade, investment, clean energy, health, security, education, and other shared priorities.
Prime Minister Shehbaz Sharif attended the 75th anniversary of the Pak-US diplomatic relations.