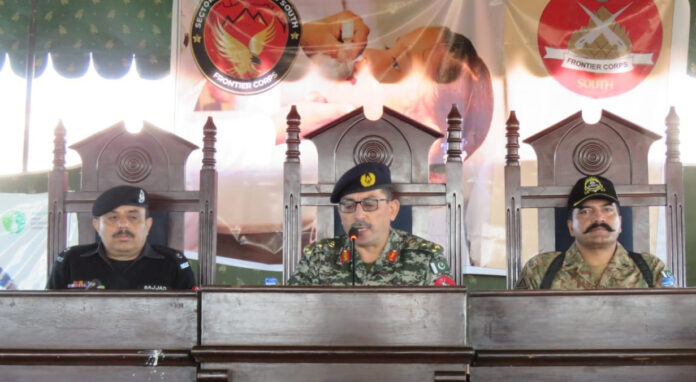 TANK
With special support of FC and Sector Sector Headquarter Frontier Corps (FC) South, an exclusive event was held here on Monday in district Tank, aiming to create anti-polio awareness.
The participants were announced the importance of vaccinating children during the polio campaign.
Anti-Polio awareness campaign was hosted at Captain Sikandar Shaheed Camp by Sector Headquarter South which was attended by Sector Commander South and District Police Officer Sajjad Ahmad Sahibzada, Commanding Officer 25 Sindh, District Health officer Dr Ihsanullah Bittani and MS Abbas Sherani, representative of district administration Tank,South Waziristan, notables, local media persons, parents and scholars including tribal elders.
District Police Chief Sajjad Ahmed Sahibzada, District Health Officer Dr. Ihsanullah Bettani, Dr.Younis, Malik Qayyum Kundi, Mufti Allah Noor, Maulana Muhammad Siddique, Malik Muhammad Shah and Polio officials speaking on the occasion said that the main purpose of gathering today is to raise awareness against polio.
“We must all work together against polio as it was national cause”, adding that it was the duty of parents and citizens to do the same to eradicate the polio virus from society.
By giving polio drops, we can save our generation from permanent disability because children infected with the polio virus become disabled for life.
Sector Commander South also addressed the anti-polio awareness campaign and said that the Pakistan Armed Forces should fulfill its duty as a national responsibility in eradicating polio.
He said that we are committed to provide full support to the administration and the polio teams by using all its resources in collaboration with the administration in the polio campaign so that no child in Tank can be deprived of vaccine against polio during the polio drive.
He said that all state institutions and people in Tank were on one page for the success of polio campaign and complete eradication of the virus.
He said that we are committed to provide a healthy society to their descendants. The main task of Army and FC South is to maintain peace as peace is a prerequisite for development
We are all ambassadors of polio campaign in this Jihad against Polio. Scholars, media, civil society, esteemed locals, parents and ordinary citizens should play their full role in the ongoing awareness campaign against polio.
He urged the people to prove as a responsible citizen by participating in every upcoming polio campaign.